There are at least two people dead and an unknown number of people missing after a reported tornado roared through El Reno, Oklahoma, and hit a hotel, mobile home park and several other buildings late Saturday. 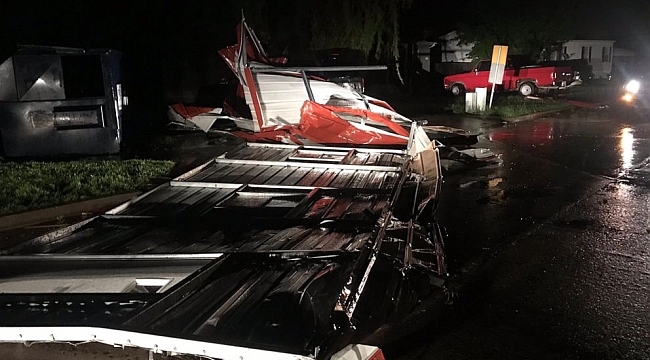 Video from the scene showed severe damage to the hotel, an American Budget Value Inn.

"As far as we know right now, there is no one in the rubble," the hotel's owner, Ramesh Patel, told ABC Oklahoma affiliate KOCO.

The woman who was working in the office broke her leg, according to the hotel's owner.

"We have absolutely experienced a traumatic event here in El Reno," Mayor Matt White said. "We had an incident where a tornado hit a mobile home park, a hotel and several business."

White asked people to stay away from the area while search-and-rescue personnel continue to pick through the debris from the hotel and trailer park.

"I think El Reno, Oklahoma, needs a lot of prayers. It's been a traumatic experience," White said.

"Please pray for those effected by these storms as well as the emergency services workers assisting in this ongoing rescue," police said in a statement posted to Facebook. "This is an unfortunate example of just how quickly these types of storms can develop from a simple thunderstorm into a deadly supercell tornado."

The tornado that hit El Reno comes on the heels of a very active severe weather week in the Southern Plains. There were 104 tornadoes reported across eight states -- Texas, Oklahoma, Kansas, Nebraska, Missouri, Iowa, Illinois and Maryland -- from Monday to Thursday.

Three people were killed in Golden City, Missouri, on Thursday as a tornado moved through the region. The state's capital, Jefferson City, about three hours northeast, also suffered severe damage the same night from a tornado, but no one was killed.

At least four other people were also killed from storms, including flash flooding, in the central U.S. this week.