Actor and former California Gov. Arnold Schwarzenegger was apparently assaulted at an event in South Africa. 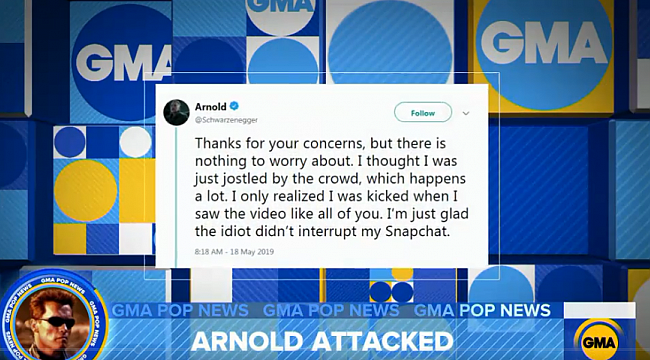 In a video now making the rounds on social media, the former bodybuilder and Mr. Universe himself was filming kids attending the Arnold Classic Africa, a multi-sport event that takes place on six continents each year, when an unknown man appears to run up behind the 71-year-old and drop kick him in the back.

Off-camera, someone can be heard shouting "Help me!"

In a video that appear to show another angle of the incident, Schwarzenegger appears to stumble forward after the strike.

The suspect was swiftly apprehended and dragged away, and Arnold went back to greeting fans and attendees of the multi-sport event.

In a later tweet, Arnold thanked people for their concern over the incident saying there was nothing to worry about, adding: “Thanks for your concerns, but there is nothing to worry about. I thought I was just jostled by the crowd, which happens a lot. I only realized I was kicked when I saw the video like all of you. I’m just glad the idiot didn’t interrupt my Snapchat."

In a follow-up, he asked his followers to stop sharing the video, and instead focus on the athletes performing at the event.