Did you know that Chinese fortune cookies are American? Originated in Japan, giving with the Japanese tea, then started in the US with Chinese food. Several biz owners in SF and LA claimed that they started. Then the court decided that it was originated in SF, CA. Chinese people in China finds it too American. 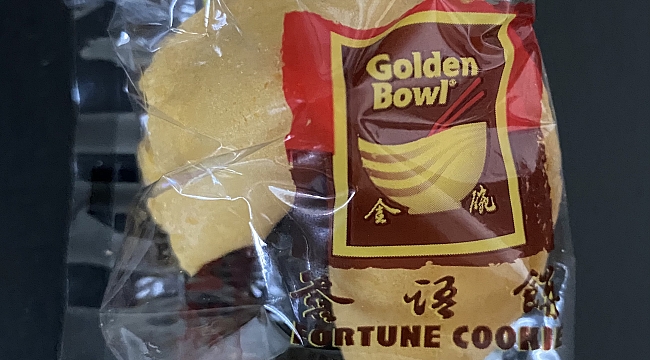 A fortune cookie is a crisp and sugary cookieusually made from flour, sugar, vanilla, and sesame seed oil with a piece of paper inside, a "fortune", on which is an aphorism, or a vague prophecy. The message inside may also include a Chinese phrase with translation and/or a list of lucky numbers used by some as lottery numbers; since relatively few distinct messages are printed, in the recorded case where winning numbers happened to be printed, the lottery had an unexpectedly high number of winners sharing a prize.

Fortune cookies are often served as a dessert in Chinese restaurants in the United States and other countries, but they are not Chinese in origin. The exact origin of fortune cookies is unclear, though various immigrant groups in California claim to have popularized them in the early 20th century. They most likely originated from cookies made by Japanese immigrants to the United States in the late 19th or early 20th century. The Japanese version did not have the Chinese lucky numbers and was eaten with tea. 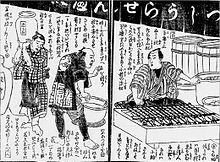 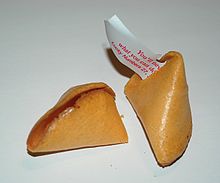 As far back as the 19th century, a cookie very similar in appearance to the modern fortune cookie was made in Kyoto, Japan; and there is a Japanese temple tradition of random fortunes, called omikuji. The Japanese version of the cookie differs in several ways: they are a little bit larger; are made of darker dough; and their batter contains sesame and miso rather than vanilla and butter. They contain a fortune; however, the small slip of paper was wedged into the bend of the cookie rather than placed inside the hollow portion. This kind of cookie is called tsujiura senbei (辻占煎餅) and is still sold in some regions of Japan, especially in Kanazawa, Ishikawa. It is also sold in the neighborhood of Fushimi Inari-taisha shrine in Kyoto.

Makoto Hagiwara of Golden Gate Park's Japanese Tea Garden in San Francisco is reported to have been the first person in the U.S. to have served the modern version of the cookie when he did so at the tea garden in the 1890s or early 1900s. The fortune cookies were made by a San Francisco bakery, Benkyodo.

David Jung, founder of the Hong Kong Noodle Company in Los Angeles, has made a competing claim that he invented the cookie in 1918. San Francisco's Court of Historical Review attempted to settle the dispute in 1983. During the proceedings, a fortune cookie was introduced as a key piece of evidence with a message reading, "S.F. Judge who rules for L.A. Not Very Smart Cookie". A federal judge of the Court of Historical Review determined that the cookie originated with Hagiwara and the court ruled in favor of San Francisco. Subsequently, the city of Los Angeles condemned the decision.

Seiichi Kito, the founder of Fugetsu-do of Little Tokyo in Los Angeles, also claims to have invented the cookie. Kito claims to have gotten the idea of putting a message in a cookie from Omikuji (fortune slip) which are sold at temples and shrines in Japan. According to his story, he sold his cookies to Chinese restaurants where they were greeted with much enthusiasm in both the Los Angeles and San Francisco areas. Thus Kito's main claim is that he is responsible for the cookie being so strongly associated with Chinese restaurants.

Up to around World War II, fortune cookies were known as "fortune tea cakes"—likely reflecting their origins in Japanese tea cakes.

Fortune cookies before the early 20th century were all made by hand. However, the fortune cookie industry changed dramatically after the fortune cookie machine was invented by Shuck Yee from Oakland, California.  The machine allowed for mass production of fortune cookies which subsequently allowed the cookies to drop in price to become the novelty and courtesy dessert many Americans are familiar with after their meals at most Chinese restaurants today. 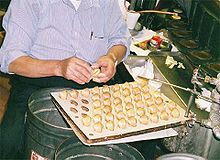 There are approximately 3 billion fortune cookies made each year around the world, the vast majority of them used for consumption in the United States.  The largest manufacturer of the cookies is Wonton Food Inc., headquartered in Brooklyn, New York. They make over 4.5 million fortune cookies per day. Other large manufacturers are Baily International in the Midwest and Peking Noodle in Los Angeles. There are other smaller, local manufacturers including Tsue Chong Co. in Seattle, Keefer Court Food in Minneapolis, Sunrise Fortune Cookie in Philadelphia, and Golden Gate Fortune Cookie Factory in San Francisco. Many smaller companies will also sell custom fortunes.

Authorities briefly investigated Wonton Food Inc. in 2005, after 110 Powerball lottery players won about $19 million after using the "lucky numbers" on the back of fortunes.

Manufacturing processes vary between plants but they generally follow the same procedure. The ingredients (typically made with a base of flour, sugar, vanilla, and sesame seed oil) are mixed in a large tank and squirted onto fast moving trays. These function like a conveyor belt and are heated to cook the dough. Cookies are compressed with round hot plates to shape and cook them. The cookies bake for approximately one minute and are reshaped. They can be mechanically shaped or folded by hand. When automated, a machine folds the cookie into the right orientation with the fortune inside. Cooled and hardened cookies are sealed in plastic wrappers, which are then inspected before being sent to be served. (Wikipedia) 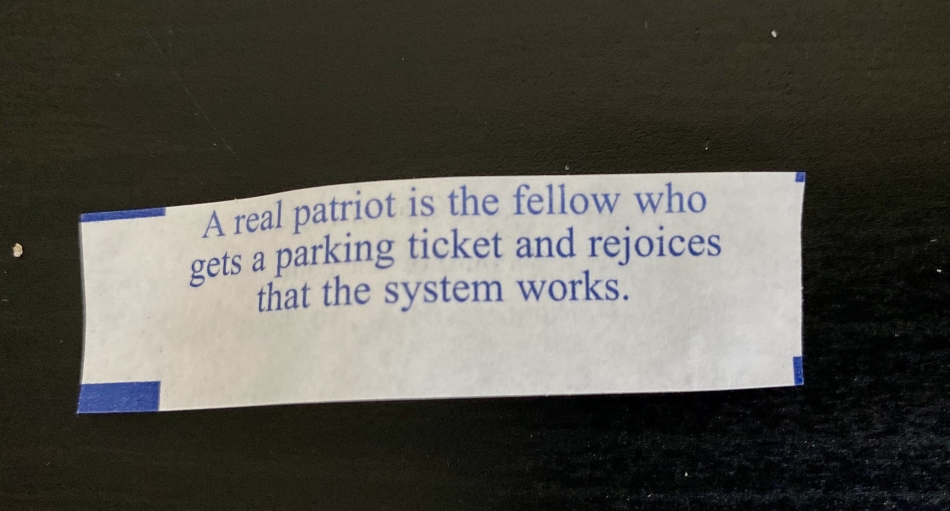 This is my fortune for today! (Esra) 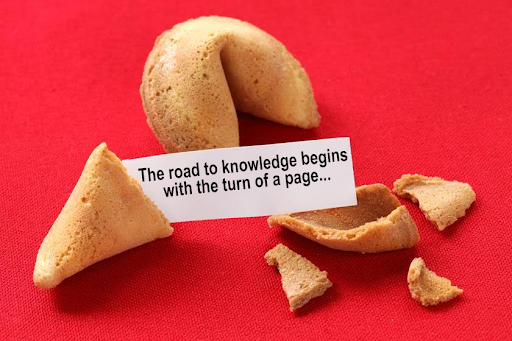 Much to most Americans' surprise, the fortune cookie is not a Chinese invention. Fortune Cookies Actually Originated in California! It is actually an American invention originating in California. 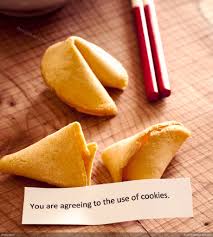 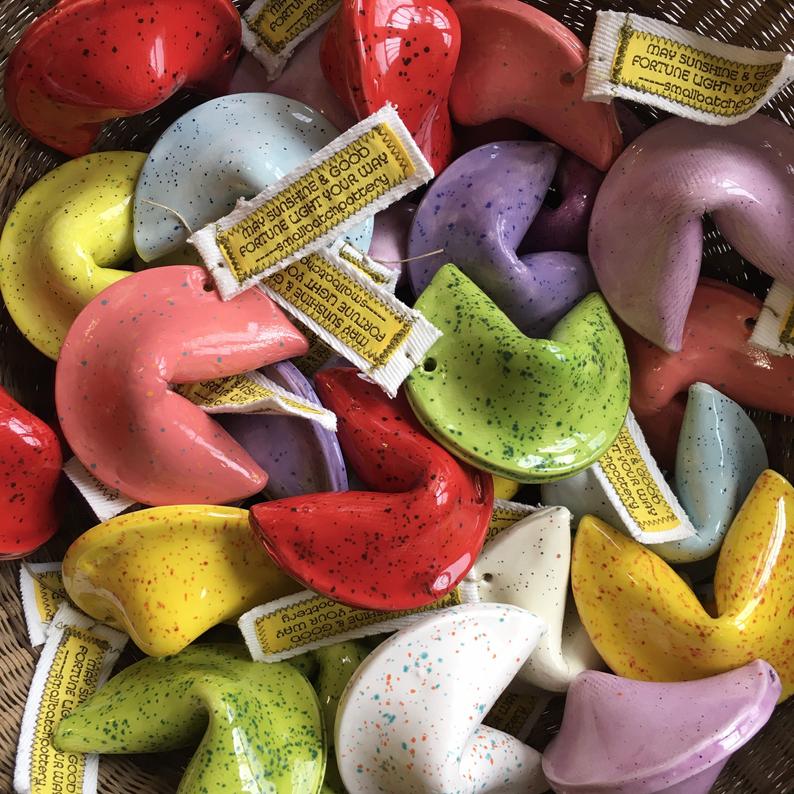 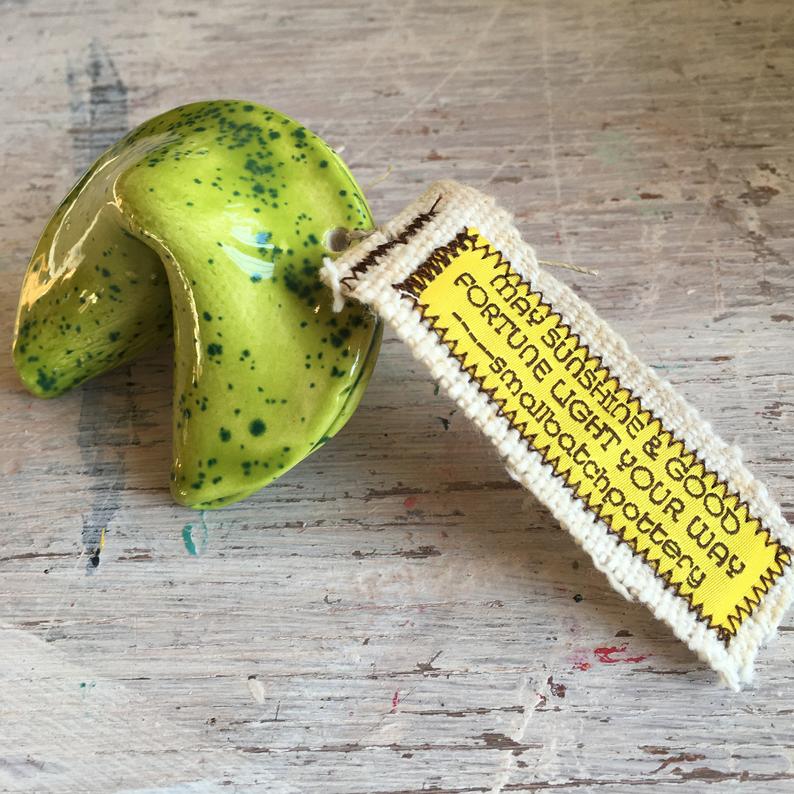 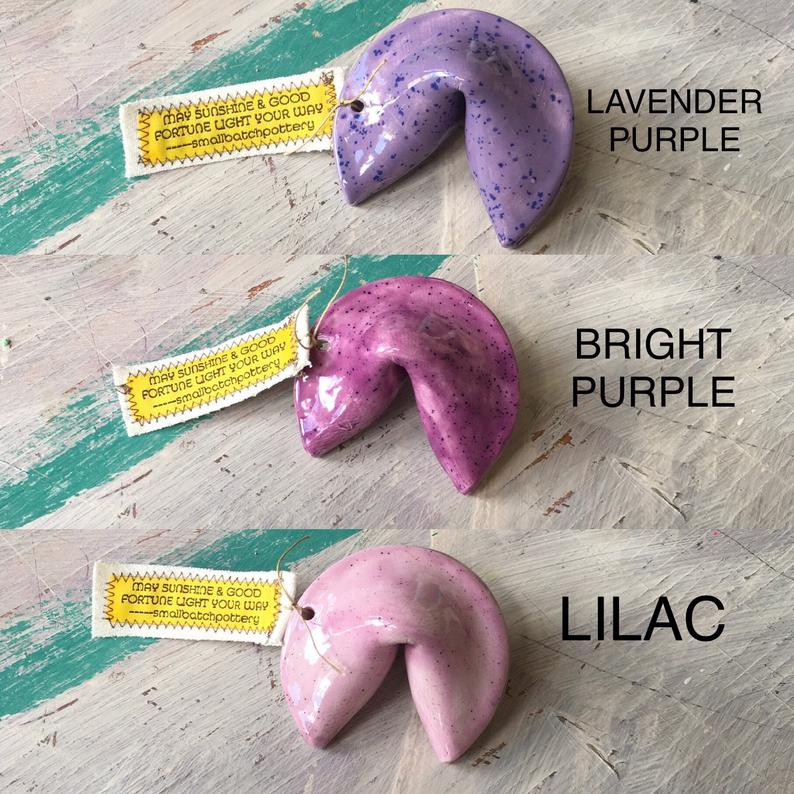 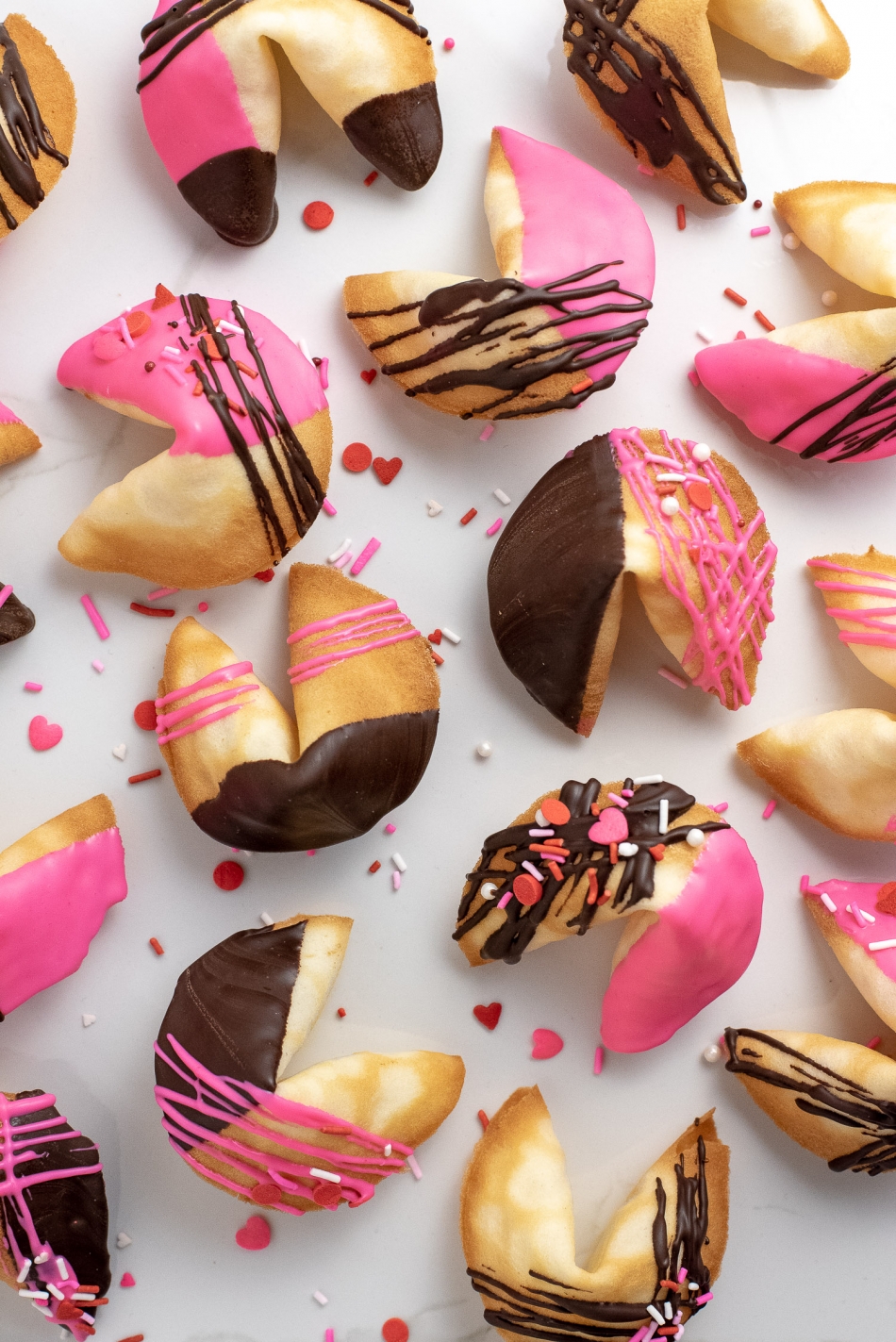