Mustafa Kemal Tekinay was born on Feb. 20, 1920 in Kilis, Turkey, at the height of the
struggle for Turkish Independence as the Turkish Republic was being born. His father was a judge while his mother was a middle school teacher. Being progressive democrats, they
named their son Mustafa Kemal after the great leader of the Independence Movement.
(The hero who was later to be named Atatürk.) The eldest son of the family , Mustafa Kemal was to have a brother three years later, Selahattin Sulhi.
Upon graduating from a boys’ high school - Adana Erkek Lisesi - in 1937, he entered Medical School (Ankara Tıp Fakultesi) and graduated in 1944 He went on to practice general medicine in Bodrum until 1948, when he decided to go to Paris to specialize in tuberculosis and chest diseases. He stayed in France for four years, learned French and completed his residency. He then went to London to study English and, in 1954, he came to New York with the hope of becoming a medical doctor in the US. He started his second residency in internal medicine in New Jersey.
Dr. Tekinay’s strong entrepreneurial nature led him to eventually open a very successful
private medical practice in Astoria, NY. His waiting room was filled to the brim with patients everyday. In 1962, he married the elegant and accomplished Dr. Turkan Savci, a pediatrician who worked along side her husband over the course of her 25+ year career in medicine.
They had 2 children, a daughter, Sema and a son, Kemal Junior. Dr. Tekinay retired to Florida in 1985 to enjoy his golden years with his wife and friends. He died on Sept. 29, 2021 in his home in Pompano Beach, FL surrounded by family. He is buried in Pinelawn Memorial Park in Farmingdale, NY. 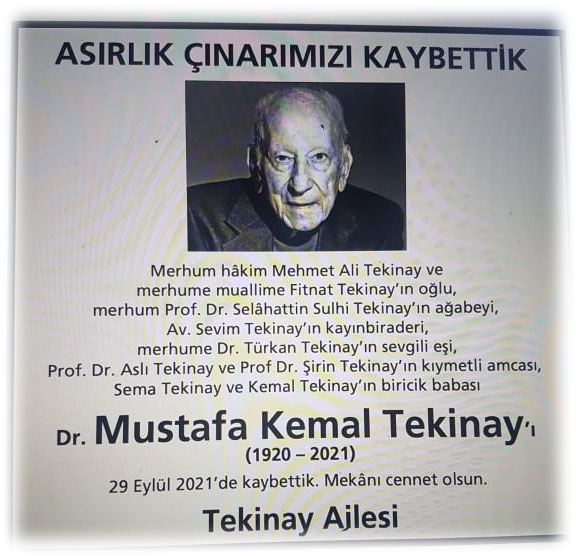